As a result of climate change, population growth, and rising expectations regarding quality of life, energy requirements for cooling processes are growing much faster worldwide than for heating. Another problem that besets today's refrigeration systems is that most coolants cause environmental and health damage. A novel technology could provide a solution: refrigeration using magnetic materials in magnetic fields. Researchers at the Technische Universität (TU) Darmstadt and the Helmholtz-Zentrum Dresden-Rossendorf (HZDR) have developed the idea of a cooling cycle based on the 'magnetic memory' of special alloys. Relevant initial experimental results have now been published in Nature Materials. The magnetic properties of metals can change when they are heated or cooled. Iron, for example, is only ferromagnetic below 768 degrees Celsius; nickel's transformation temperature is 360 degrees Celsius. Conversely, some alloys become ferromagnetic when they warm up. This phase transition is connected with the so-called magnetocaloric effect: when these shape-memory alloys are placed in an external magnetic field just below their transformation temperature, they spontaneously jump to their magnetic order and simultaneously cool down.The stronger the magnetic field, the more they cool.

The scientists succeeded in providing experimental proof. They used an alloy of nickel, manganese, and indium for experiments because its conversion can be triggered at room temperature. The researchers generated the magnetic field using the strongest permanent magnets known to date – containing the rare-earth metal neodymium in addition to iron and boron.

They can generate magnetic fields up to a flux density of 2 tesla – that is 40,000 times stronger than the Earth's magnetic field. Under such conditions, the alloy cools down by several degrees. Measurements  have been made at the HLD have shown that a millisecond in the magnetic field is already enough for permanent transformation.

In the next step of the six-step cycle, the researchers removed the cooling element from the magnetic field, which retained its magnetization. In step three, the heat sink comes into contact with goods to be cooled down and absorbs its heat. The alloy even remains magnetic if the material returns to its original temperature. This can be remedied by mechanical pressure: in step four, a roller compresses the shape memory alloy. Under pressure, it switches to its denser, non-magnetic form and heats up in the process. When the pressure is removed in step five, the material retains its state and remains demagnetized. In the final step, the alloy releases heat into the environment until it has returned to its initial temperature and the cooling cycle can recommence. 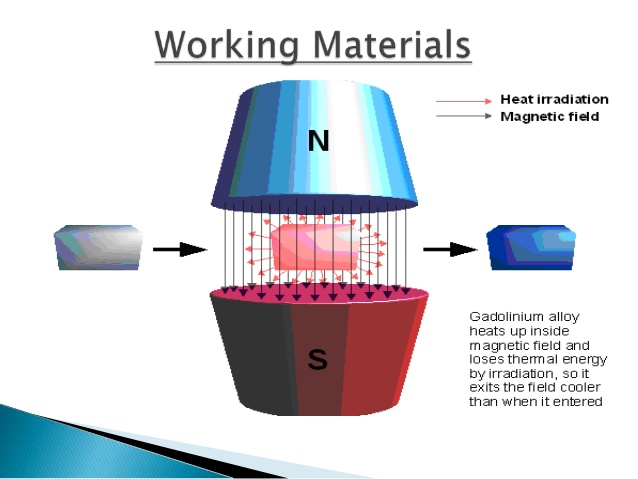 Just a few years ago, alloys with a magnetic memory were regarded as unusable because they can only be cooled in the magnetic field once. Global research, therefore, focused on materials that have no memory effect.

However, refrigerators produced according to this principle come at a price.The largest item in the manufacturing costs are the necessary permanent magnets: In the case of reversible magnetization, the cooling effect only lasts as long as the cooling element is exposed to the magnetic field. Even in the best-case scenario, half of the coolant must be placed between the magnets. This means that four times more as much permanent magnet needed as cooling medium.Neodymium magnets are the most effective, but they are also the most expensive on the market. In addition, the rare-earth metal is a critical raw material, and considerable amounts of it are needed. The largest known deposits are in China.

Electromagnets cannot be used for magnetic cooling. For physical reasons, the level of efficiency would be lower than with vapor compression, which is used in billions of refrigerators and air conditioners. However, the researchers are convinced that this cooling technology no longer has a future: There are simply no suitable cooling liquids, The coolants commonly used today are highly effective as heat-transfer media, but their greenhouse impact is a thousand times greater than that of carbon dioxide. Propane or butane are effective coolants, but form highly explosive mixtures in contact with the air. Ammonia is toxic and corrosive. Carbon dioxide is not especially efficient as a coolant.

Using rare earths, scientists are also convinced that the future belongs to solid coolants. They have been able to show that shape-memory alloys are highly suitable for cooling cycles, A far fewer neodymium magnets are needed but can nevertheless generate stronger fields and a correspondingly greater cooling effect.