NdFeB is replaced on the demand side. There are two possibilities. One is to be replaced by magnetic materials with better performance, such as the fourth generation of rare earth permanent magnet materials, rare earth iron and nitrogen; Poor material substitution, such as ferrite or samarium cobalt magnets. The first possibility, from a performance point of view, given that it will take at least several decades for the fourth-generation rare earth permanent magnetic material to form a mature process to become practical, it is difficult to produce magnetic materials with better performance in the short term. The second possibility is that from the perspective of cost performance, samarium cobalt magnets and ferrites are likely to partially replace or even completely replace NdFeB magnets in the low-end field. In the high-end field, the rigidity demand of NdFeB and emerging demand is hard to replace. Therefore, the application growth in the high-end field is the decisive factor for the future development of the NdFeB industry, and the replacement of the low-end application field may not hinder the rapid development of the entire NdFeB magnetic material industry.

NdFeB series with different performance levels are suitable for different application fields. According to the definition of "China High-tech Product Catalog 2006", high-performance neodymium iron boron permanent magnet materials mainly refer to those made by the rapid-setting stripping method, with intrinsic coercivity Hcj (kOe) and maximum magnetic energy product (BH) max (MGOe) Sintered NdFeB permanent magnet materials whose sum is greater than 60; however, companies in the market often do not distinguish between high-performance and low-end NdFeB according to this standard, but based on the difference of downstream products. In general, High-performance neodymium iron boron mainly refers to the neodymium iron boron in various types of motors, compressors and sensors used in the field of high-tech barriers, including permanent magnet motors, EPS, wind power generation, frequency conversion appliances, energy-saving motors, and advanced audio and video equipment And other fields. With the development of new energy vehicles in recent years, the demand for magnetic materials for new energy vehicle motors has also become an important market for high-end NdFeB magnetic materials. 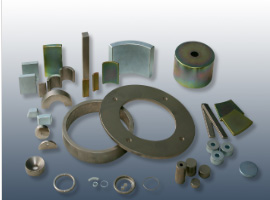