How long can China's Confidence in Controlling the Global Rare Earths Last? (1)

"China is considering cutting off the supply of rare earths to the U.S. military industry", and the most advanced F-35 fighter jet in the United States may be discontinued.

Rare earth prices have been a hot topic since the second half of last year. The soaring increase that has not been seen in a few years has caused a lot of attention for a while.

China did implement the new "Export Control Law" on December 1st last year; in January this year, the Ministry of Industry and Information Technology issued the "Regulations on Rare Earth Management" for comments, which clearly mentioned that rare earths are applicable to export control. But these are normal legislative acts in China, and perfecting its own legal system is still a thousand miles away from actual sanctions. How do you think of the United States? The original report also interviewed a senior executive of a Chinese rare earth company. The other party said that China had asked how much rare earth control can have on American military industrial companies. This is all about the "cutting confession" to the United States.

However, just like China's sense of anxiety in the field of chips, Western countries' attention to rare earths is understandable. After all, China’s output was once as high as 90% of the world's total. Someday there really was a change in core interests, and one hundred and eight thousand miles was just a matter of somersaults. Trump, who has just stepped down, knows the lethality of China's rare earth "ace" best. In order to revive the rare earth industry in the United States, he has been tossing for several years, and there is a high probability that Bi will continue his policy after he takes the stage. And China’s own question also needs to be answered urgently. How to rationally mine precious rare earths, will there be a day of exhaustion? In the face of the United States, which wants to revive the rare earth industry, how long can China maintain its control over the global rare earth market?

01. What is the experience of mining rare earth mines as iron ore?

The United States used to be the country with the largest rare earth production in the world. Since 1984, it was suddenly surpassed by the "nameless" China. At that time, the Baiyun Obo rare earth mine in Inner Mongolia was officially put into operation. Baiyun Obo is China's most important rare earth producing area, with its reserves accounting for 83% of the country's total energy. But after all, China's rare earth reserves only account for 39% of the world's total, so why do they account for 90% of production? Because the price is low, the sales volume is large. During this period, low prices were China's main advantage. This aspect is vicious competition among domestic mining companies. At one time, China's rare earth export enterprises reached more than 200, which does not include the black industry chain of illegal mining and smuggling of rare earth ore. According to customs data in 2012, black rare earths accounted for more than half of China's rare earth exports. The more important reason is that the mining cost of rare earths in China is much lower than others. The unique ion-type rare earth mines in southern China are the most easily extracted heavy rare earth resources in the world, and the low cost is not difficult to understand. The cost of light rare earths available in the world is also the lowest in China.

How did the low cost of the Baiyun Obo rare earth mine come from?

First of all, according to public data, the proportion of rare earth oxides (REO) in the Bayan Obo Rare Earth Mine is 3%-5%, which is of high quality and talent in the world. Another secret is hidden in a technical term-tailings. In general, when talking about the rare earth reserves of Bayan Obo, in addition to introducing its 35 million tons of rare earth oxide reserves, it is also added that the rare earth oxides from tailings are 12.8 million tons.
What does this "tailings" mean? Simply understand, it is the slag left over from mining iron ore. Bayan Obo is not simply a rare earth mine. It is characterized by the symbiosis of iron and rare earths. Iron ore is the bulk, with an iron content of about 34%. When the Bayan Obo Mine was first developed in the 1950s, China did not have rare earth mining technology and there was no domestic demand. It was mainly mined as an iron ore. Baotou Iron and Steel Plant, one of the earliest iron and steel industrial bases in New China, was built because of the Baiyun Obo Mine.

In the process of iron ore mining, there is a process called beneficiation, in which large pieces of ore are crushed first, and then crushed stones with high iron content are selected. For example, Baiyun Obo is dominated by magnetite. When beneficiating, the beneficiation can be completed with a magnet. The discarded ore remaining after the beneficiation is completed is called "tailings".

There is a saying on the Internet that China's largest rare earth mine has been dug as iron ore for decades and that rare earths have been thrown away as waste, which refers to this period of history.

Did we really throw away rare earths? Of course not, the country has always been thinking about it. Moreover, since the tailings from iron ore mining have been dug up and broken up, they are used to refine rare earths a few decades later, so the cost will naturally be reduced a lot. It can be said that before China had the rare earth mining technology, it was already mining. Today's low-cost rare earths are a fringe benefit of the entire industrial history of New China. 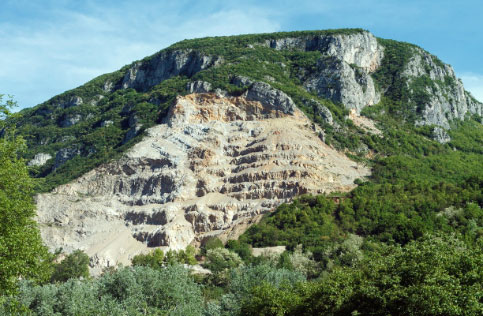