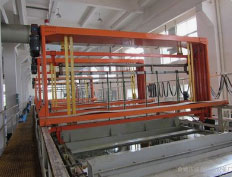 The design of the automatic magnetron sputtering coating equipment has been completed, and the equipment is being customized. The installation is expected to be completed in April 2021. "The current production line processes 100 tons of neodymium iron boron magnet materials per year. After installing new equipment, it can process 300-400 tons of neodymium iron boron magnet materials annually, which increases production efficiency by 4-5 times and reduces personnel by 30%." In recent years, national and local environmental protection awareness has been increasing. The development of green coating technology adapted to the protection of rare earth permanent magnetic materials is related to the healthy development of the industry in the future. "Research on electroplating technology, process and equipment to improve performance and reduce emissions is a common concern of the domestic NdFeB industry. Research and application of physical vapor deposition magnetron sputtering technology is aimed at improving China’s magnet protection technology and large rare earth Equipment manufacturing capacity of permanent magnet material surface protection equipment."

Due to the structure of NdFeB, its corrosion resistance is poor, and it must be applied through protective treatment. More than 95% of domestic sintered NdFeB products use electroplating protection technology, and generally more than 65% of NdFeB magnets are electroplated It is processed in the form of "outsourcing".The structure and chemical properties of NdFeB make it react with pickling solution and electroplating solution during the electroplating process. When the protective coating has not covered the magnet workpiece, the magnet has been corroded, causing looseness and electrolysis on the surface of the magnet. Defects such as liquid residue and cracks. The NdFeB enterprise's own electroplating processing and through "outsourcing" processing, the pressure on environmental protection and emission control is increasing, and the management level and product consistency are also uneven.

In the future, power motor magnets are an important application direction of NdFeB. Electroplating is difficult to meet the protection requirements. This is because the frequent start of the motor causes the electroplating coating stress to fluctuate under the action of the alternating temperature field, which eventually leads to the coating peeling.Put a green coat on NdFeB material.Due to the market prospects and important position of NdFeB, foreign manufacturers all regard the surface protection technology of NdFeB as an important technical secret. Therefore, to improve product competitiveness, occupy the international market, and give play to the resource advantages of rare earth countries, it is necessary to develop NdFeB protection technology with independent intellectual property rights in China.

It is reported that physical vapor deposition thin film technology (PVD), such as magnetron sputtering, ion plating, and evaporation plating, is a good method for depositing thin films, and protective coatings can be obtained. Using this technology to deposit a metal film on the surface of NdFeB has high stability, coating/matrix bonding, and high density, and has strong anti-corrosion ability in an alternating hot and cold environment. Studies have shown that if the sputtering particle energy is high enough during the deposition process, the coercivity of the magnet can be increased. In addition, the thickness of the coating layer affected by the corners of the magnet workpiece during the physical vapor deposition plating process is much lower than that of electroplating and chemical plating, and there is no pollution problem in the preparation process.The physical vapor deposition magnetron sputtering technology applies orthogonal electric and magnetic fields between the anode (substrate) and the cathode (heavy rare earth target), so that the argon gas is excited between the electric field and the magnetic field to generate high-energy argon ions. Argon ions are deposited on the surface of the substrate in the form of atoms by hitting the heavy rare earth target, so that the excited atoms of the high energy heavy rare earth target are uniformly and firmly attached to the surface of the substrate, which is conducive to the subsequent high vacuum heat diffusion process of heavy rare earth atoms. Currently, 15 patents have been applied for, including one invention patent, 6 utility model patents, and 4 trademarks.

The use of green and pollution-free physical vapor deposition technology is the future development direction of NdFeB protection. China's first continuous green and pollution-free physical vapor deposition industrialization demonstration production line with an annual output of 100 tons has been built. The products can not only meet the requirements of emerging applications such as wind power and electric vehicles, but also adopt high-temperature samarium-cobalt permanent magnets protected by physical vapor deposition. It can also meet the needs of high-tech fields. It is of great significance to promote the industrialization of green coatings and to improve the quality of China's rare earth permanent magnetic materials.