The use of magnets to relieve pain is becoming more and more popular with the public. However, despite its popularity, there is lack of scientific evidence to prove that magnets have any therapeutic benefit. Usually, traditional doctors are still skeptical about the benefits of magnets. Despite this reasonable mainstream skepticism, this article aims to provide balanced, truthful information to the public who are seeking information about magnets.

When talking about magnets, we are not talking about the types of magnets found on refrigerator doors, but biomagnets, which are magnets made for physical and mental rehabilitation. Biomagnets are named after bioscience (magnetic science).

When studying in school, we learned that magnetism is a kind of energy on the earth. Every atom has a nucleus with positively charged protons and negatively charged electrons that rotate around it to generate a magnetic field. For thousands of years, ancient civilizations have studied positive and negative magnetism. For example, in Chinese medicine, the balance of these positive and negative forces, which are considered yin and yang, represents good health.

Although it has not been scientifically proven and controversial, the theory suggests that biomagnets alone cannot be cured, but instead stimulate the human body to heal naturally. These unproven claims include: restoring the magnetic balance of cells; accelerating the migration of calcium ions, helping to heal bones and nerve tissue; because the biomagnet is attracted by the iron in the blood, the increase in blood circulation helps to recover, thereby Enhance blood circulation; biomagnets have a positive effect on the pH balance of cells; hormone production is affected by the use of biomagnets.

In addition to theory, an important aspect of the use of biomagnets is the polarity of the magnet. This is related to the direction in which the magnet is placed. The north pole corresponds to yin, or negative polarity in traditional Chinese medicine. The South Pole corresponds to the traditional Chinese medicine yang, which is the positive pole. Below, take the magnetic influence of the south pole and the north pole as an example:

If the body seems to lack both positive and negative energy to heal, the therapist may apply both the North and South Pole (called bipolar). Bipolar biomagnet therapy can be used to cure fractures or treat chronic pain.

The type of disease determines the type and power of the biomagnet to be used, the length and severity of the patient's problem, if the disease is superficial or deep, the body area to be treated and the patient's condition.Some patients are sensitive to biomagnet therapy. With the release of toxins, the treatment may temporarily worsen the condition. Dizziness, headache, drowsiness and itching are some of these side effects.

Biomagnets are not suitable for everyone. As with any handling, there are some warnings that can be followed. For example, during pregnancy, patients with a history of epilepsy, taking blood thinning drugs, bleeding from wounds, or internal bleeding, should not use biomagnets. Do not use biomagnets for patients with pacemakers or metal implants that may fall off due to the use of magnets. 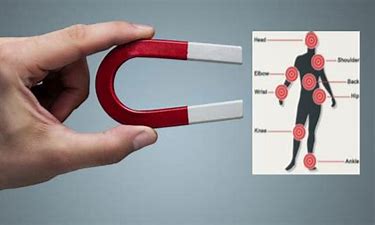